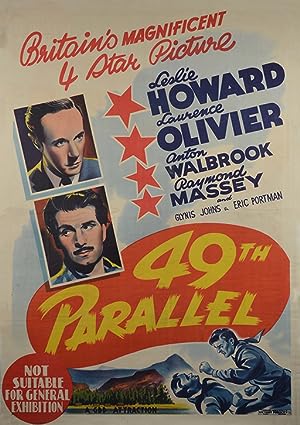 Summary: In the early years of World War II, a German U-boat (U-37) sinks Allied shipping in the Gulf of St. Lawrence and then tries to evade Canadian Military Forces seeking to destroy it by sailing up to Hudson Bay. The U-boat’s Fanatical Nazi captain sends some members of his crew to look for food and other supplies at a Hudson Bay Company outpost. No sooner than the shore party (lead by Lieutenant Hirth) reaches the shore, the U-boat is spotted and sunk by the Canadian Armed Forces leaving the six members of the shore party stranded in Canada. The Nazi Lieutenant then starts to plan his crews’ return to the Fatherland. He needs to reach the neutral United States or be captured. Along the way they meet a variety of characters each with their own views on the war and nationalism. In this film Michael Powell and Emeric Pressburger show their ideas of why the United States should join the Allied fight against the Nazis.