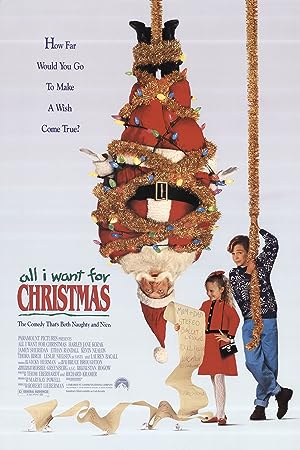 Summary: “All I Want For Christmas” is a comedy about two New York City children who launch a hilarious scheme to get what they most want this holiday season. Ethan, a practical older brother, and adorable Hallie, who knows how to charm her way out of a difficult situation, are intent on spending Christmas with their parents, Catherine and Michael, and grandmother Lillian. As Ethan and Hallie embark on their adventure, almost nothing goes exactly as they planned. Complicating things is a smarmy businessman named Toney Boer, who has taken an interest in Catherine. Ethan, meanwhile, is preoccupied with not only his parents’ romantic dilemma, but also his own – one brought about by his new friendship with Stephanie, his first teenage crush. What evolves is an elaborate scheme involving mice, telephone calls and an ice-cream truck, as Ethan and Hallie try to achieve their goal with the help of Stephanie. The duo’s primary obstacle is their mother’s fiance, Tony. The children finally succeed with a little Christmas magic from Santa Claus.