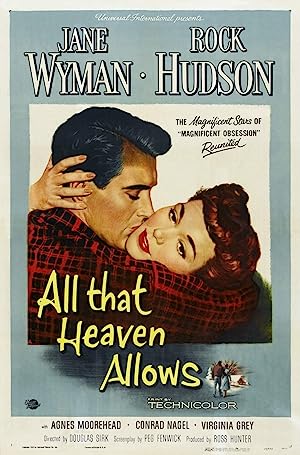 Summary: Cary Scott is a widow with two grown children. She’s been leading a quiet life since her husband died, socializing with a small circle of friends. Her children no longer live with her full-time but come home every weekend. She’s not unhappy but also doesn’t realize how bored she is. Her friend Sara Warren encourages he to get a television set to keep her company but she doesn’t want that either. She develops a friendship with Ron Kirby who owns his own nursery and comes every spring and fall to trim her trees. Ron is much younger than she and their friendship soon turns to love. Her circle of friends are surprised that she is seeing such a younger man and she might be prepared to overlook that – Ron certainly doesn’t care about the differences in their ages – but when her son and daughter vehemently object, she decides to sacrifice her own feelings for their happiness. Over time however, she realizes that her children will be spending less and less time with her as they pursue their own lives an re-evaluates her decision.