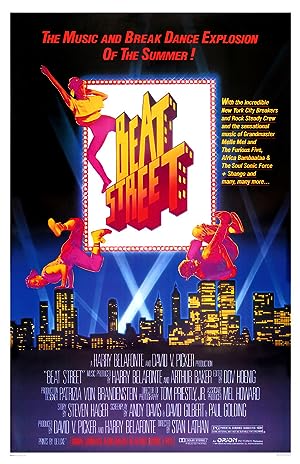 Summary: An upbeat, lets-put-on-a-show musical about the wonders of hip-hop music and culture that tells the story of Kenny, a young hip-hop artist living in the rough slums of the Bronx with his younger brother Lee and their mother Cora. Kenny dreams of making it big as a disc jockey and playing in the most swank of Manhattan nightclubs, the Roxy. Into their lives comes Tracy, a composer and assistant choreographer from the City College of New York, who inspires him to try to continue his dream while romance begins to grow between them, despite coming from different neighborhoods and worlds. Meanwhile, Lee is part of a break-dancing crew set on dominating the scene of their street. The rest of their friends include Ramon, a graffiti artist determined to spread his painting to every subway car in the city while dealing with his girlfriend Carmen and Chollie, a fellow disc jockey who becomes Kenny’s manager after he lands him a gig at a Bronx club. Many hip-hop groups, electro artists, break dancers, and Latin freestyle singers, who include Us Girls, the Treacherous Three, the System, the Rock Steady Crew, Afrika Bambaataa & Soul Sonic Force and Shango, the Magnificent Force, the New York City Breakers, Grand Master Melle Mel & the Furious Five, Tina B., Johnny B. Bad, and many more, make cameo appearances.