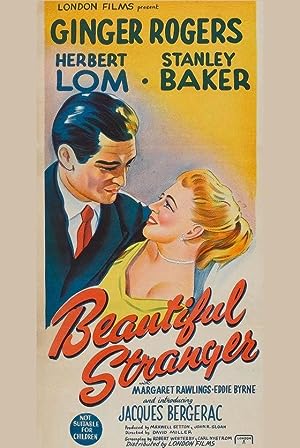 Summary: Ginger Rogers is in love with an international businessman, Stanley Baker, who is actually the head of a syndicate that mints illegal coins for the Continental market. But she soon learns that Baker has been deceiving her and has no intentions of divorcing his wife. So she meets Jacques Bergerac, a potter, and falls for him (onscreen and off). Into this little slice of life comes Herbert Lom, a confidence man, and he steals a bracelet that Baker had given Rogers and uses it to pay a debt. Enter a twist-of-fate (the US title that describes the film a lot better than the UK title, which is not unusual for films going from America to England but seldon vice-versa), and it ends up in Baker’s hands. Strained creditabilty aside since many, many films depend on beating the coincidental odds, Baker assumes that Lom is Rogers’ lover, and this sin’t a good assumption on his part sinve Lom kills him and then makes it appear as if Rogers and Bergerac did the deed.