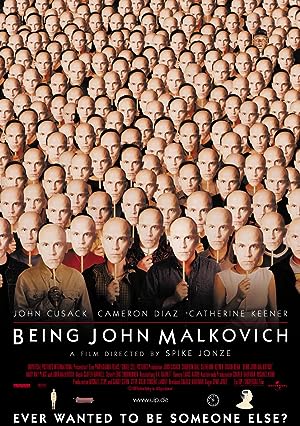 Summary: Puppeteer Craig Schwartz and animal lover and pet store clerk Lotte Schwartz are just going through the motions of their marriage. Despite not being able to earn a living solely through puppeteering, Craig loves his profession as it allows him to inhabit the skin of others. He begins to take the ability to inhabit the skin of others to the next level when he is forced to take a job as a file clerk for the off-kilter LesterCorp, located on the five-foot tall 7½ floor of a Manhattan office building. Behind one of the filing cabinets in his work area, Craig finds a hidden door which he learns is a portal into the mind of John Malkovich, the visit through the portal which lasts fifteen minutes after which the person is spit into a ditch next to the New Jersey Turnpike. Craig is fascinated by the meaning of life associated with this finding. Lotte’s trips through the portal make her evaluate her own self. And the confident Maxine Lund, one of Craig’s co-workers who he tells about the portal if only because he is attracted to her, thinks that it is a money making opportunity in selling trips into Malkovich’s mind after office hours for $200 a visit. Craig, Lotte and Maxine begin to understand that anyone entering the portal has the ability to control Malkovich’s mind, which also alters his entire being. This experience makes Maxine fall in love with a composite. This ability to control Malkovich’s mind begs the question of the ultimate psychedelic trip for Malkovich himself, who begins to feel that something is not right in the world as he knows it.