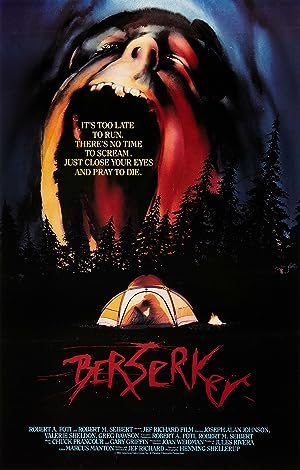 Summary: In the 10th century a viking ship arrives on the North American shore. In present day, somewhere in the woods, a couple of seniors is struck down by a frenzied assailant. The next day, assertive rock music-loving Josh takes his college friends, easy-going Mike, Mike’s fun-loving girlfriend Shelly, enthusiastic Kathy, Kathy’s unenthusiastic frizzy-haired friend Kristi and bookworm Larry, in his black pickup to a cabin near a creek in the woods where he and his family used to camp. They have fun there until nightfall. Josh becomes nostalgic for the days of his youth he spent there with his folks and unsuccessfully tries to hit on Kristi, Mike and Shelly have fun with each other and Kathy shows subtle interest in Larry. Larry however is more interested in the history of the place, since it’s said that vikings from Norway landed in the vicinity 1000 years ago and built the first settlement there. Another story he’s curious about is the Nordic myth of the curse of the berserker. Some warriors among the vikings would allow themselves to become possessed with primal berserker rage. In this state, they were unstoppable and would kill everything in site and even eat the flesh of their enemies. They could sometimes even kill a bear with their bare hands and use its skin as a cloak, claws as weapons and snout as a mask. However, they would pay a terrible price for becoming berserkers, since even in their death they were never to find peace and their rage would return to possess their offspring. Meanwhile, the worried local state trooper and de facto local sheriff, Officer Hill, plays chess with his friend and local Pappy Nyquis and mentions the college kids and the cabin. Pappy mentions that Homer and Edna, a nice senior couple who rented the cabin, should be somewhere around there as well. Hill has a bad feeling, but he isn’t sure why.