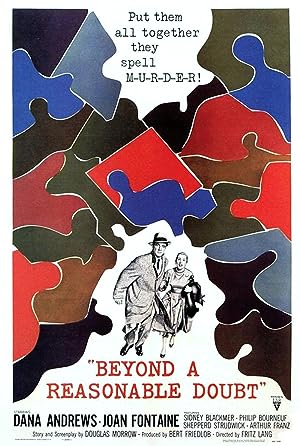 Summary: Investigative reporter Tom Garrett is on leave from his newspaper job to work on his second novel. As Tom is having problems writing that second book, his boss and future father-in-law, newspaper publisher Austin Spencer, suggests he write a non-fiction book on capital punishment in their state instead. Both Austin and Tom have long believed that the state district attorney, Roy Thompson, has been able to manipulate juries into rendering wrongful guilty verdicts leading to the deaths of innocent people on death row. The plan would be to plant evidence leading to a guilty verdict of an innocent person in a murder case, Tom to be that innocent person. Austin and Tom would document all that planted evidence, and make it public after the rendering of the guilty verdict to reverse that wrongful verdict and hopefully lead to discussion of the merits of abolishing capital punishment. They decide that the fewer people that know about the plan, the better, which means not telling Tom’s fiancée/Austin’s daughter, Susan Spencer, about the plan. They are certain that the plan will not jeopardize Susan and Tom’s ultimate marriage. They decide that the unsolved murder of burlesque dancer Patty Gray will be the case they use. As Tom and Austin go about implementing their plan, they don’t account for two items which ultimately do place Tom’s life in jeopardy. Saving Tom’s life may in part may depend on the support of Susan, which may not be as easy to obtain as expected.