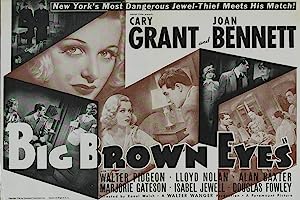 Summary: Dan Barr is a flatfoot on the trail of jewel robbers. Eve Fallon is his girl of 5 years. We meet them spitting and sparring, but never doubting they’re in love. Eve is a manicurist, with an eye for news. Soon after we meet her, she’s out of the beauty salon and into the news-room as an ace reporter. With Eve’s help, Dan nabs one of the jewel gang members, Cortig, whose stray bullet killed a baby in the park. A spooked witness and a slick lawyer get Cortig off. Disgusted with the lack of justice, Dan quits the force to find his own justice. Eve, likewise, quits the paper and returns to her job as manicurist. While giving a manicure, Eve unwittingly discovers that a prominent local citizen is the jewel gang’s leader. All the while, Dan is hot on the trail. Their trails merge and the case is solved.