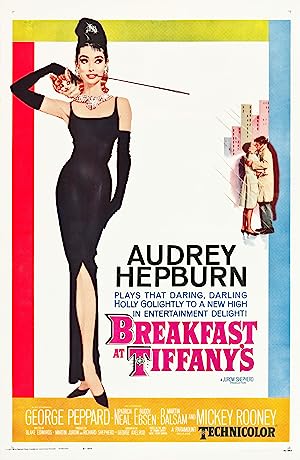 Summary: Holly Golightly is a flighty Manhattan party girl, who expects “money for the powder room as well as for cab fare” for her companionship. She has even gotten a lucrative once weekly job to visit notorious convict Sally Tomato in Sing Sing, she needing to report back to Sally’s lawyer the weather report that Sally tells her as proof of her visits with him in return for payment. Her aspirations for glamor and wealth are epitomized by the comfort she feels at Tiffany’s, the famous high end jewelry retailer where she believes nothing can ever go wrong. Her resolve for this wealth is strengthened, if not changed slightly in focus, upon news from home. Into Holly’s walk-up apartment building and thus her life is Paul Varjak, a writer who Holly states reminds her of her brother Fred, who she has not seen in years and who is currently enlisted in the army. The two quickly become friends in their want for something outside of their current lot. Paul’s situation is closer to Holly’s than he would like to admit. Having not had anything published in over five years, he is a kept man by his wealthy married “decorator”, Emily Eustace Failenson – who he refers to as 2E – which allows him not to write, which he no longer truly does. Eventually, Paul falls for Holly, and wants to take care of her, instead of being taken care of as is his current situation. Although Holly also seems to be falling for him, the question becomes whether Paul can fulfill Holly’s life aspirations, and if not what needs to change for there even to be the possibility of a future for them.