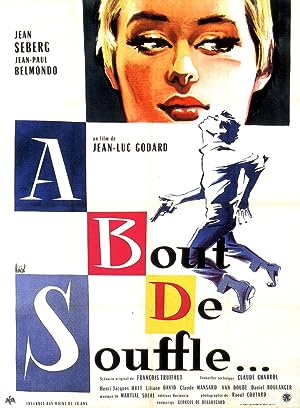 Summary: Michel Poiccard, an irresponsible sociopath and small-time thief, steals a car and impulsively murders the motorcycle policeman who pursues him. Now wanted by the authorities, he renews his relationship with Patricia Franchini, a hip American girl studying journalism at the Sorbonne, whom he had met in Nice a few weeks earlier. Before leaving Paris, he plans to collect a debt from an underworld acquaintance and expects her to accompany him on his planned getaway to Italy. Even with his face in the local papers and media, Poiccard seems oblivious to the dragnet that is slowly closing around him as he recklessly pursues his love of American movies and libidinous interest in the beautiful American.