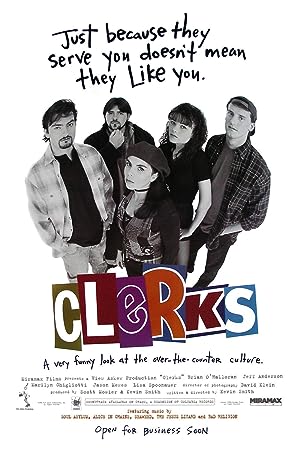 Summary: Dante Hicks is not having a good day. He works as a clerk in a small convenience store and is told to come into work on his day off. Dante thinks life is a series of down endings and this day is proving to no different. He reads in the newspaper that his ex-girlfriend Caitlin is getting married. His present girlfriend reveals to have somewhat more experience with sex that he ever imagined. His principal concerns are the hockey game he has that afternoon and the wake for a friend who died. His buddy Randal Graves works as a clerk in the video store next and he hates his job just about as much as Dante hates his.