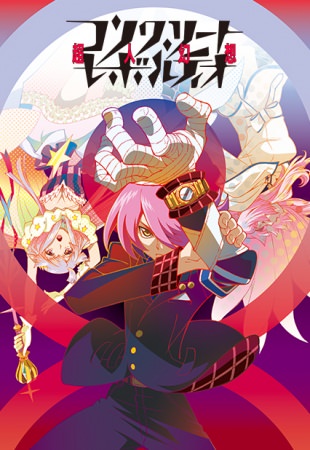 Summary: Concrete Revolutio: Choujin Gensou takes place in an alternate future during the year Apotheosis 41. Earth has been inhabited by an array of beings once thought to be pure fiction: ghosts, robots, aliens, cyborgs, you name it. This horrific reality is not something that many can accept. To keep the civilian population from panicking and to protect humanity from any new threats that may arise, the various governments of the world have decided to keep this information secret.

The Japanese government’s solution to this problem is to set up the Super Population Research Laboratory, also known as the “Superhuman Bureau.” This organization is tasked with keeping track of all the special beings within Japan and containing, or eliminating, individuals that are deemed to be a threat. As only other superhumans can really stand up to superhumans, the Bureau consists of almost all non-human members. The one exception is Jirou Hitoyoshi, whose main job is to recruit new talent and bolster the number of superhumans working for the government. One day, a crucial decision forces Jirou to become a vigilante, with the Bureau he once served now hunting him. How will he handle the transition from hero to fugitive?