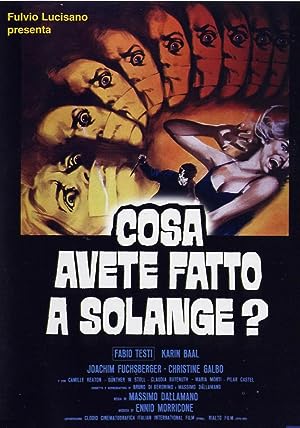 Summary: In London, the Italian gym teacher Enrico ‘Henry’ Rosseni is having a love affair with his eighteen year-old student Elizabeth Seccles, who is the daughter of the owner of the Catholic School where he works and she studies. His estranged wife Herta Rosseni is the mathematics teacher in the same school. On Sunday afternoon, Rosseni and Elizabeth are in a boat in a grove and the girl glances at a knife and a man hunting down a woman. Rosseni believes she is giving a pretext to avoid him and does not pay attention to her. On the next morning, Rosseni learns that a teenager was murdered in the river bank in the grove and he drives to the location. Inspector Barth goes to the school since the victim Hilda studied there and soon Rosseni becomes the prime suspect since he protects Elizabeth, who could give an alibi to him. When a second student is murdered, Elizabeth recalls that the killer where a black soutane worn by priests. While the police investigate the suspects, Elizabeth is killed and Rosseni decides also to investigate. He teams up with Herta and the find the name of the mysterious Solange Beauregard. They seek her out but what might have happened to Solange?