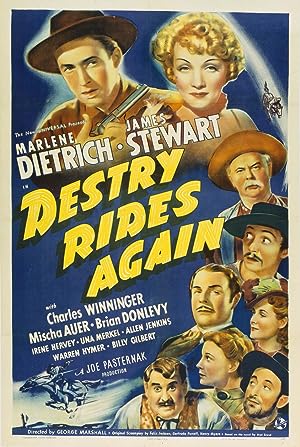 Summary: Kent, the unscrupulous boss of Bottleneck has Sheriff Keogh killed when he asks one too many questions about a rigged poker game that gives Kent a stranglehold over the local cattle rangers. The mayor, who is in cahoots with Kent appoints the town drunk, Washington Dimsdale, as the new sheriff assuming that he’ll be easy to control. But what the mayor doesn’t know is that Dimsdale was a deputy under famous lawman, Tom Destry, and is able to call upon the equally formidable Tom Destry Jr to be his deputy. Featuring a career reviving performance from Marlene Dietrich as bar singer Frenchie, which could well have been the inspiration for Madeline Kahn’s “Blazing Saddles” character, Lili Von Schtupp.