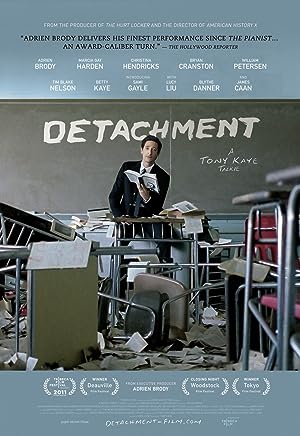 Summary: Detachment is a chronicle of three weeks in the lives of several high school teachers, administrators and students through the eyes of a substitute teacher named Henry Barthes. Henry roams from school to school, imparting modes of knowledge, but never staying long enough to form any semblance of sentient attachment. A perfect profession for one seeking to hide out in the open. One day Henry arrives at his next assignment. Upon his entry into this particular school, a secret world of emotion is awakened within him by three women. A girl named Meredith in his first period. A fellow teacher Ms. Madison, and a street hooker named Erica, whom Henry has personally granted brief shelter from the streets. Each one of these women, like Henry, are in a life and death struggle to find beauty in a seemingly vicious and loveless world.