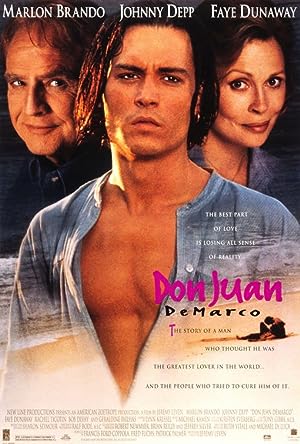 Summary: Well-respected psychiatrist Dr. Jack Mickler is only 10 days away from his retirement. A week before he is due to leave, he encounters a young man who attempts suicide–would be a pretty straightforward case except the young man claims to be Don Juan, the fabled Spanish nobleman and world renowned seducer/lover of woman. Despite original hostility from his co-workers, Jack manages to persuade his associates to put the youth in his care for 10 days after which the youth will undergo an evaluation to be either released from psychiatric care or sent to a mental institution. However, as the 10 days progresses, Dr. Mickler and the other staff become gradually drawn into to the young man’s exotic world of love, passion and pleasure as he recounts his story to them. Whilst doing so the man’s philosophies and zeal for life and love begins to revive Dr. Mickler’s somewhat passionless relationship with his wife, Marilyn as well as challenging his own views and ethics to the point where both he and the audience begin to question: could this young man truly be Don Juan?