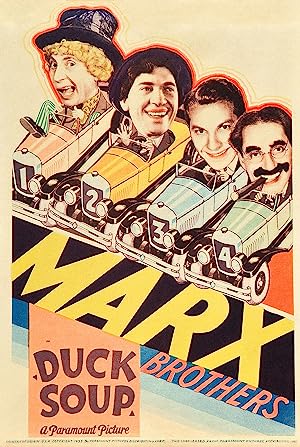 Summary: The country of Freedonia is in the middle of a financial crisis and on the brink of revolution. In order to gain a bail-out from the wealthy Mrs Teasdale, the government appoints Rufus T Firefly as its president. However, Mr Firefly shuns the pomp and pretentiousness of government; along with the prudence and rationality of it too. Meanwhile, the neighbouring country of Sylvania is plotting to overthrow Freedonia and sends Pinky and Chicolini to spy on Firefly. War seems inevitable.