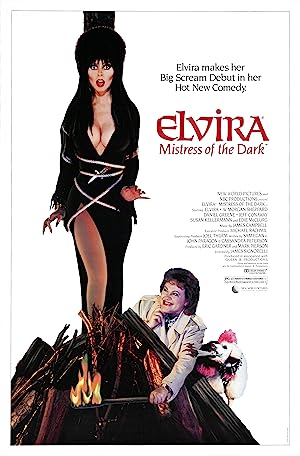 Summary: When a chauvinist millionaire buys the television network where the sexy Elvira is the horror hostess of a late show, she quits her job with the intention of producing her own show in Las Vegas. However, the producers demand 50 thousand dollars from her and Elvira does not have the money. Out of the blue, she receives a telegram informing that her great-aunt Morgana died and she has an inheritance to receive. Elvira drives to the uptight town of Fallwell, Massachusetts, where her convertible breaks down. While repairing her convertible, Elvira inherits an archaic mansion, a recipe book and a poodle. Her great-uncle Vincent Talbot proposes to buy her book, but the poodle hides it in the sofa. Meanwhile, the conservative council of Fallwell feels uncomfortable with Elvira’s clothes and behavior and does not let her find a job. But cinema owner Bob Redding and the local teenagers help Elvira. When she decides to cook a dinner to impress Bob, she uses Morgana’s recipe and finds that it is indeed a spell book that belonged to her mother Divana. Further, Morgana has protected her from the warlock Vincent that wants the book to take over the world and destroy Elvira, who is a powerful witch. When Elvira refuses to sell the spell book to Vincent, he convinces the council that she is a witch that must be burned at the stake. How will Elvira stop the evil warlock Vincent?