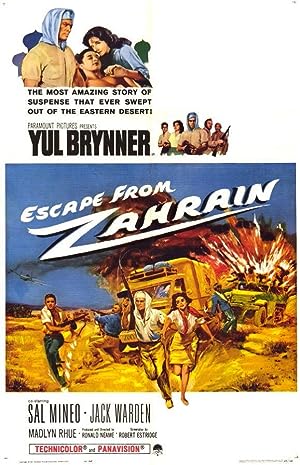 Summary: During the 1960s, in a fictitious strife-ridden Arab nation, captured revolutionary nationalist leader Sharif is being transported to a prison for execution. The police van transporting him to the prison is attacked by Sharif’s fanatical followers. Ahmed, the leader of the students’ revolt frees Sharif along with three other prisoners. Among them is Huston, an American who has embezzled money from the Zahrain Oil Company. The fugitives capture an ambulance and its nurse, Laila. They flee from the city toward the border but during their trek across the desert, the convict Hassan is killed in a police ambush. A romance starts between Ahmed, the student leader and Laila, the ambulance nurse. Unfortunately, Ahmed is later killed by a government strafing fighter plane. Later, Tahar, another convict, is also killed.The three lone survivors are Laila, Sharif and Huston. Will they reach their destination?