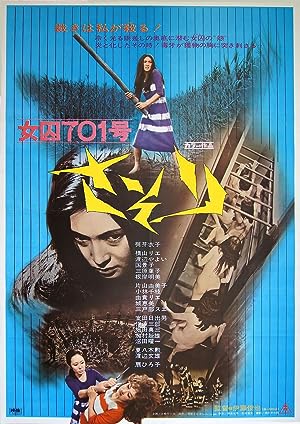 Summary: After being cruelly set up and deceived by Sugimi (Natsuyagi Isao), a conniving and crooked detective she had whole-heartedly fallen in love with (and subsequently lost her virginity to…), Matsushima Nami’s desire for revenge knows no bounds. Her failed attempt at stabbing Sugimi on the steps of the Tokyo Metropolitan Police Headquarters results in her doing hard time in a female prison run by sadistic and horny male guards. To Sugimi’s surprise, Matsushima refuses to testify against him and his connections to the mob, and now the sheer fact that she knows such secrets makes her a liability. So Sugimi and the Japanese mafia orchestrate a plan whereby Matsushima will succumb to an “accidental” death in prison. They enlist the help of Kagiri, another female inmate with ties to both Sugimi and the mafia, thus their formidable plan is quickly set in motion. Little do they realize, however, how hotly Matsushima’s desire for revenge burns within her.