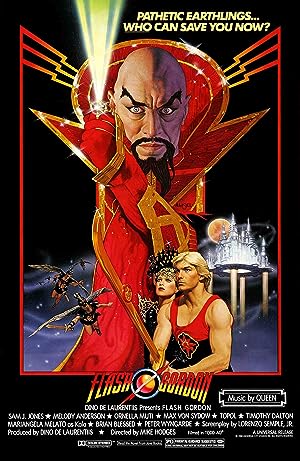 Summary: Flash Gordon is an American football hero who is skyjacked aboard Dr. Hans Zarkov’s rocketship along with his beautiful girlfriend Dale Arden. The threesome are drawn into the influence of the planet Mongo, ruled by Emperor Ming the Merciless. The evil Ming has been testing Earth with unnatural disasters, and deeming our world a threat to his rule. He also intends to take Dale as his concubine, attempts to execute Flash and intends to destroy Earth. Flash must avoid the amorous attentions of Ming’s daughter, and unite the warring kingdoms of Mongo to rescue Dale and save our world.