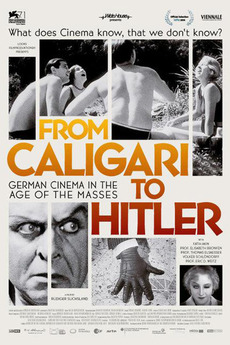 From Caligari to Hitler: German Cinema in the Age of the Masses (2014)

Summary: “Metropolis” (1927), “The Cabinet of Dr. Caligari” (1920), “M” (1931), “Nosferatu” (1922), “People on Sunday” (1930), “Berlin, Symphony of a Metropolis” (1927) all rank among the classics and most influential films of European Cinema. FROM CALIGARI TO HITLER tells the story of early German Cinema as the story of social and cultural upheaval in the first republic, between 1918 and 1933. Siegfried Kracauer, who wrote the groundbreaking book ‘From Caligari to Hitler’ (1947) on this ‘Weimar Cinema’, is a central figure, as is Fritz Lang, the most versatile of all Weimar directors. The viewer will encounter the cast members of the young Republic’s stage: Marlene Dietrich, Louise Brooks, Emil Jannings, directors such as G.W.Pabst and F.W. Murnau, writers like Billy Wilder and many more – those who helped shape the new art of cinema.