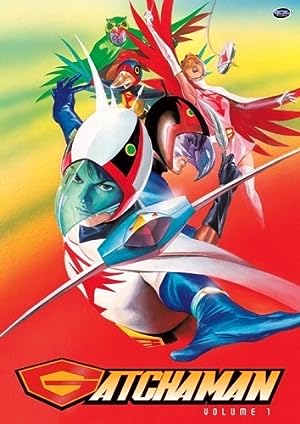 Summary: In the year 2001, Earth is under attack by a terrorist organization named Galactor, which is waging a destructive campaign of conquest and terror using super-high technology in the form of bizarre and supremely powerful war machines and biological weapons. The United Nations’s forces are helpless to stop this menace, but Professor Nambu of the International Science Organization has a counterforce of his own: the Science Ninja Team, a team of super-agile youngsters who operate with a bird theme and have fighting skills that are a match for any foe, regardless of numbers or firepower. The team is made up of Ken (Eagle), aka Gatchaman, their noble leader with an incomplete past; his hotheaded second-in-command Jô (Condor), their level-headed electronics and demolitions expert; Jun (Swan), their young and impulsive reconnaissance specialist; Jinpei (Swallow), Jun’s adopted brother and eighth-generation decedent of the Iga ninja; and their jovial and rotund pilot, Ryû (Owl) are determined to frustrate Galactor at every turn. They have advanced personal vehicles that are carried inside their main vehicle, the God Phoenix, an advanced, supersonic, and heavily armed aircraft that can go into any environment and can temporarily transform into a destructive bird of fire to escape danger. However, the fight won’t be any easier because Galactor’s leaders, who are the mysterious entity known only as Sôsai X, and his immediate human subordinate, Berugu Katse, have even darker secrets that our heroes can only suspect.