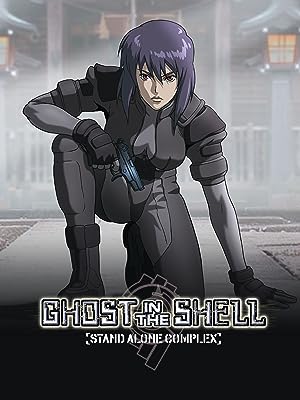 Summary: The second season of Ghost in The Shell: Stand Alone Complex begins with Section 9 being called back to work after a hostage situation of concern to the Ruling Party renders the Police useless. The entire team returns to the front lines: Kusanagi, Batoh, Togusa, Ishikawa, Saito, Paz & Borma, with four of the original Tachikomas restored after the firefight of Episode 26. The hostage situation announced the rising of a new terrorist cell, which takes much after another one in the headlines of today’s papers. The Individual Eleven, whose members are neither individuals, or total up to eleven are a new threat to Public Security. How does a specialized public security group face an enemy more faceless than the “laughing man” during a time of political unrest? Among the broad changes from the first show involve the new ruling party, headed by the new Prime Minister Kabayuki after the prior ousting in GITS: SAC, the Japanese Residents caught in the middle of the affairs and paying the taxes for jobs they’re going to lose in a time of recession, and the downtrodden “invited” Asian Immigrants of the Second Vietnamese War who were brought to Japan as a half-hearted humanitarian act from the government who was really just seeking cheap labor. And just who is the man called “Gohda”, a mysterious new ‘supervisor’ (don’t worry, Aramaki still runs the group) who appears to be calling the shots for Section 9 during certain missions? He calls out orders as if he was in charge of the group, yet has no apparent loyalty or respect to the government, military or Section 9.