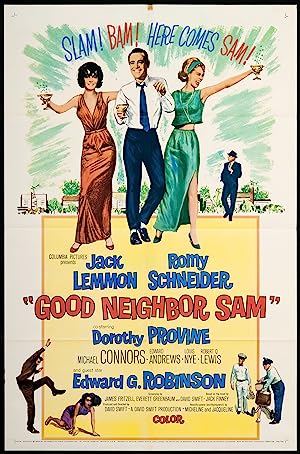 Summary: Sam Bissel is a wholesome family man with a loving wife, Min, and two loving daughters. They lead a happy suburban life. The only part of Sam’s life that he is not happy about is his job as a lowly cog in the art department of the advertising firm of Burke & Hare. Sam’s professional life takes a major turn when he is made executive of the Nurdlinger Dairy account. Simon Nurdlinger is a wholesome family man who wants a wholesome family man with wholesome family ideals heading his account, Sam the only one in Burke & Hare that fits the bill. Sam’s home life also takes a major turn when Min’s college friend, Janet Lagerlof, moves in next door. Janet stands to inherit $15 million from her grandfather’s estate, but the will has a clause that she must be happily married to inherit the money. Janet is technically divorced from Howard Ebbets, and states that getting back with Howard is not worth $15 million. But when Jack Bailey and Irene Krump – two of Janet’s relatives who would like to find any excuse to contest the will – come by for an unexpected visit, Janet impetuously introduces Sam as her husband, Howard. Things get more complicated for Sam when he is later forced to introduce Janet as Mrs. Bissel to both Burke and Nurdlinger. Sam and by association Min go along with the ruse, and for their troubles Janet offers to give them $1 million of her inheritance. After that, further complications occur: Janet notices a private investigator snooping around the neighborhood, the P.I. hired by Janet’s relatives; Howard, Janet’s ex-husband comes back wanting to reconcile with her; and without Sam’s knowledge, the Nurdlinger creative includes billboards featuring a wholesome couple espousing the goodness of Nurdlinger milk, that wholesome couple being Sam and Janet as Mr. & Mrs. Sam Bissel. They just have to continue dealing with these complications until the legal hearing. But Min may just have had enough of this plan before they get the money.