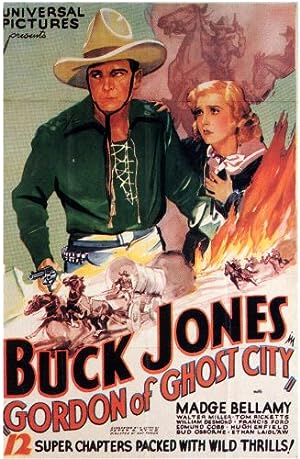 Summary: Universal’s 19th sound-era serial (between “The Phantom of the Air” and “Perils of Pauline”) and Buck Jones’ first serial was an extended remake of Universal’s 1932 “Flaming Guns” starring Tom Mix. Craig Reynolds (billed as Hugh Enfield and playing Ed Roberts) was not billed 4th in the cast as some source seems to think, but he was billed 2nd (to Evalyn Knapp) in Universal’s next serial “Perils of Pauline” but under the screen-billing name of Robert Allen. That name, Robert Allen,appeared often in many films, with the most use belonging to Columbia contractee and western star Robert Allen.But, aside from him and Craig Reynolds’use of it in “The Perils of Pauline’, it also appeared in the cast listing for three or more westerns produced/directed by Robert Emmett Tansey in the 1940’s, and the players actually playing the role attributed to “Robert Allen” in the cast listing turned out to be director/actor Robert F.Hill once, John Tansey once and Lee Roberts once.Don’t look here for any explanation regarding anything Robert Emmett Tansey did.Back to “Gordon of Ghost City”: Buck Gordon is hired by rancher John Mulford to hunt down a gang of cattle rustlers, whose leader, unknown to Mulford, is Mulford’s foreman Rance Radigan. Buck meets Mary Gray whose grandfather, Amos, has discovered a rich vein of gold under his old store in Ghost City, and wants Mary to have it. However, a mystery man, who turns out to be Gray’s old partner Jim Carmody, tries to stop the mining of the vein. Faced with two unknown foes, Buck calls on all of his resources, plus those of his horse Silver, to protect Mary.Chapter titles 1-12 in order were:A Lone Hand-The Stampede-Trapped-The Man of Mystery-Riding for Life-Blazing Prairies-Entombed in the Tunnel-Stampede-Flames of Fury-Swimming in the Torrent (with a chapter ending using stock footage of Tom Mix that would show up in three more Universal serials)-A Wild Ride and Mystery of Ghost City. Dennis Moore has a bit as a Mulford cowhand and has to be shown on this site appearing under the name of Dennis Moore (since he wasn’t credited) but the guarantee here is that he showed up at the payroll window as Denny Meadows (since he wasn’t using Dennis Moore as a name in 1933), which is also how he is listed (as Denny Meadows) on the Call Sheet for this serial.