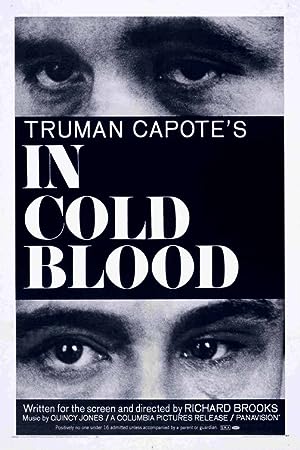 Summary: In meeting in Kansas, ex-cons Perry Smith and Dick Hickock are breaking several conditions of their respective paroles. The meeting, initiated by Dick, is to plan and eventually carry out a robbery based on information he had received from a fellow inmate about $10,000 cash being locked in a hidden safe in the home of the farming Clutter family of Holcomb, Kansas. After the robbery, they plan on going to Mexico permanently to elude capture by the police. Each brings a necessary personality to the partnership to carry out the plan, Dick who is the brash manipulator, Perry the outwardly more sensitive but unrealistic dreamer with a violent streak under the surface. Perry literally carries all his dreams in a large box he takes with him wherever he goes. The robbery does not go according to plan in any respect, the pair who ultimately hogtie and execute all four members of the Clutter family, only coming away from the home with $43 in cash. As Perry and Dick go on the run, a murder investigation ensues, led by Topeka based Detective Alvin Dewey. If Dewey and his team are able eventually to identify the pair as the murderers and capture them, they, if they understand the two, may get their much needed confessions in dividing and conquering. Perry and Dick’s fates may also be regardless of who literally pulled the trigger.