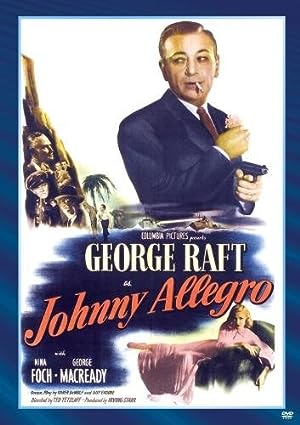 Summary: Los Angeles hotel lobby florist Johnny Allegro is a man with a secret: he’s a former criminal who escaped from the Sing Sing prison.However, Johnny went straight and became a legitimate businessman. One day, a high-class, well dressed attractive blonde runs into his arms, in the hotel lobby, and pretends she’s his date for the evening. She whispers in his ear that she is followed, in danger and needs Johnny’s help to escape. Intrigued, Johnny accepts to play along and help the stunning blonde beauty. They sit in the hotel bar and talk. Her name is Glenda Chapman and she wants to escape the police detective who sits in the lobby shadowing her. Over the following days, Johnny falls for Glenda who lives in the hotel. Unfortunatelly, Johnny is visited, in his flower shop, by Treasury Agent Schultzy who tels Johnny that he knows about Johnny’s real identity and that Johnny is an escaped criminal. However, Johnny is not arrested. Instead, the Treasury Agent asks him to assist the government in locating the source of a huge stash of counterfeit US currency flooding the country. In return, the government is prepared to help Johnny serve a reduced prison sentence for his escape from Sing Sing. Johnny agrees but he’s surprised to find out that his new romantic conquest, Glenda, is somehow involved in the counterfeit money scheme. Johnny is torn between his love for Glenda and the promise he made to the Treasury Agents.