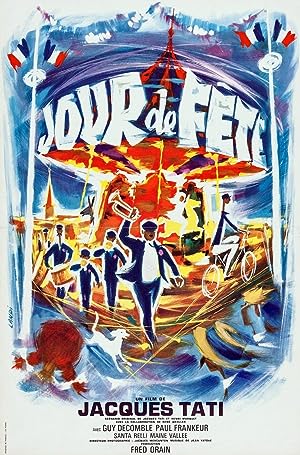 Summary: Once a year the fair comes for one day to the little town ‘Sainte-Severe-sur-Indre’. All inhabitants are scoffing at Francois, the postman, what he seems not to recognize. The rising of the flagstaff under his direction nearly leads into a catastrophy – but everybody tells him, how important his work is. Sneering up Francois continues in the evening of the festive day. Made drunk, some ‘friends’ persuade him to watch a short-movie in a tent. This film is a stunt-show, covered as ‘The modern delivery-techniques of the US-post. Francois takes it serious, not recognizing being teased. Next day, after getting sober in a goods wagon, he reorganizes his own delivery-methods. He has not the equipment, as his ideals in the short-movie have, but using only his bicycle, he makes good, funny progresses.