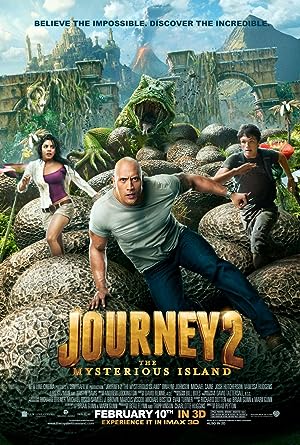 Summary: The 17-year-old Sean Anderson receives a coded signal and his stepfather Hank helps him to decipher the message. They find that Sean’s grandfather Alexander Anderson has found the mysterious island in the Pacific described by Jules Verne and two other writers in their novels. The stubborn Sean wants to travel to the coordinates and Hank decides to buy the tickets and travel with the teenager to a small island nearby the location. They rent an old helicopter owned by the locals Gabato and his teenage daughter Kailani and the group heads to the unknown spot. Along their journey, they cross a hurricane and crash on the island. They find a beautiful and dangerous place, surrounded by forests, volcanoes with lava of gold and menacing life forms. They also meet the old Alexander and Hank discovers that the island is sinking. Now their only chance to survive is to find the legendary Nautilus.