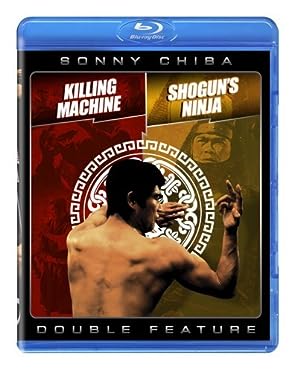 Summary: Sonny Chiba plays the character referred to as “Mr Soh”, who is based on the true life founder of Shorinji Kempo, Doshin So. Mr Soh has been acting as a secret agent in Manchuria during the Japanese occupation. He is first seen spying on a meeting of Chinese soldiers as they plan a surprise ambush on the retreating Japanese Army. He is discovered and has to fight his way out, using fists, feet and then a machine gun. He rushes to inform the Japanese commanders of the plot, but is horrified to learn that Japan has done the unthinkable by surrendering unconditionally. Soh returns to his homeland to find a ravaged land of beaten people. Victimised by gangsters, occupation forces and corrupt local officials, the poor and the disenfranchised have lost the will to fight back. Using his “Shao Lin” skills (subtitle translation of Shorinji Kempo), he regularly champions the weak and teaches the black market thugs the error of their ways, becoming a regular guest at the local prison. He is seen to assist a former soldier, Otaki, who is seeking his lost wife at the bottom of a bottle, a fallen woman (Kiku) who has turned to prostitution after suffering rape by Russian soldiers, her little brother Kimio who gets injured by some American G.I.s who subsequently try to flee from accident. The Prison Governor warns him that the US Administration will not be so tolerant now that he has “crippled” the troops, suggesting a likely death sentence. He helps him to “escape” the jail and Soh leaves town in a hurry, pausing only to give advice to the band of orphans that he has befriended. Soh leaves the city of Osaka (central Japan) to go to the rural island of Shikoku where he finds a similar situation. He determines to bring new hope to the locals by teaching his martial arts skills to a growing band of followers. He gathers the loafers, ruffians and aimless, teaches them Shorinji Kempo (referred to as “Shao Lin” in subtitles) to build them up to be stronger physically and mentally. He meets some new characters, who he soon enlists in his school; Tomoda the young ex-soldier and his sister Miho. When the noodle-stall girl Noriko is raped by a gang of yakuza thugs, Soh and Tomoda dish out some rough justice (with some sharp scissors to one of the miscreant’s tenderest flesh). Later, Tomoda and Miho are attacked and Tomoda has his arm cut off with a katana (Samurai sword). Soh avenges that with a visit to the local yakuza boss that leaves the boss with a dislocated arm and his minion missing a digit. Otaki, the former drunken soldier from Osaka joins the group, then in an emotional scene, discovers his wife is alive but has re-married after he was reported dead in the war. When the small-time local yakuza gangs are joined by familiar faces from Osaka seeking to expand their activities, it is time for action with a capital A. Before the final climactic face-off between Soh’s students and the yakuza mob, there is time for Soh to receive an urgent message to see Kiku in Osaka. He returns to find the orphans caring for a terminally ill Kiku, who had turned to prostitution to help support them all. Soh experiences an epiphany and comes to recognise that “Strength and Compassion must be together” (Riki Ai Funi). In a typically cinematic finale, Soh’s friend Otaki dies is killed by yakuza thugs paid to clear the honest poor from land to be used to build brothels and gambling dens. Soh goes on a final rampage to clear the yakuza right out of town forever. The epilogue reveals how Soh’s school has flourished and spread across Japan (circa 1975), with scenes filmed at the organisations magnificent headquarters still based in the town of Tadotsu.