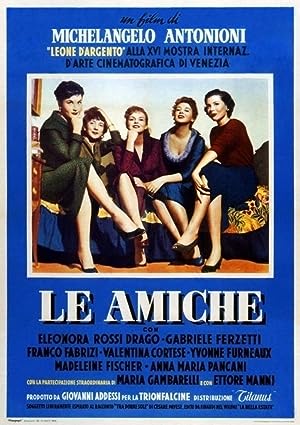 Summary: Clelia comes from Rome to her native Turin, to set up a new fashion salon. On her first night, the woman in the next room of her hotel takes an overdose of pills. Clelia becomes involved with this woman, Rosetta, and three of her rich women friends, Momina, Nene, and Mariella. Momina is older than the others, and lives apart from her husband. Her current lover is Cesare, the architect of Clelia’s salon. Nene is a talented ceramics artist, and lives with her fiance, the painter Lorenzo. Mariella is a flighty woman only interested in having a good time. Clelia becomes attached to Carlo, the architect’s assistant, but the other women look down on him as he comes from a working class background. Momina, with the help of Clelia, discovers that Rosetta fell in love with Lorenzo as he was painting her portrait. Momina then encourages Rosetta to go after Lorenzo, even though he and Nene were supposed to marry soon.