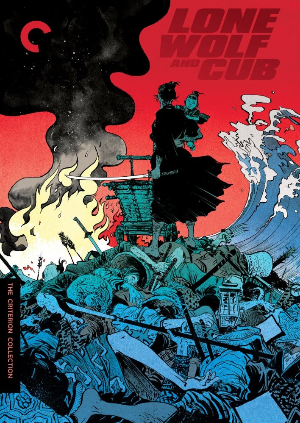 Summary: A total of six Lone Wolf and Cub films starring Tomisaburo Wakayama as Ogami Ittō and Tomikawa Akihiro as Daigoro have been produced based on the manga. They are also known as the Sword of Vengeance series, based on the English-language title of the first film, and later as the Baby Cart series, because young Daigoro travels in a baby carriage pushed by his father. The first three films, directed by Kenji Misumi, were released in 1972 and produced by Shintaro Katsu, Tomisaburo Wakayama’s brother and the star of the 26 part Zatoichi film series. The next three films were produced by Wakayama himself and directed by Buichi Saito, Kenji Misumi and Yoshiyuki Kuroda, released in 1972, 1973, and 1974 respectively.