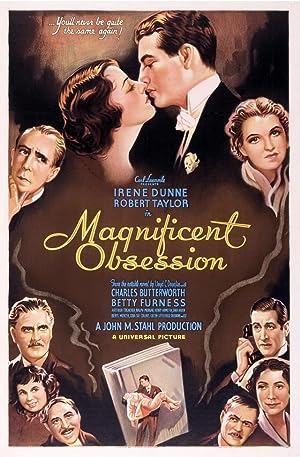 Summary: The life of spoiled rich Robert Merrick is saved through the use of a hospital’s only resuscitator, but because the medical device cannot be in two places at once, it results in the death of Dr. Hudson, a selfless, brilliant surgeon and generous philanthropist. Merrick falls for Hudson’s widow, Helen, though she holds him responsible for her husband’s demise. One day, he insists on driving her home and makes a pass at her. She gets out of the car and is struck by another car, she then goes blind. Merrick then talks to a friend of Dr. Hudson who tells him that her husband had a philosophy-to help people, but never let it be known that you are the one helping them. Only then, he believed, could there be true reward in life. Merrick watches over Helen, and visits her during her recuperation, concealing his identity and calling himself Dr. Robert. When he finds out that she is nearly penniless, he secretly pays for specialists to try to restore her vision. Finally, she travels to Paris and is told that her eyesight is gone forever. Robert follows her, confesses his true identity and proposes marriage. She forgives him, but goes away, not wanting to be a burden to him. Years later, Robert puts himself thru school and becomes a brain surgeon. He learns that Helen urgently needs an operation, which he performs. When she awakens, her sight has miraculously returned.