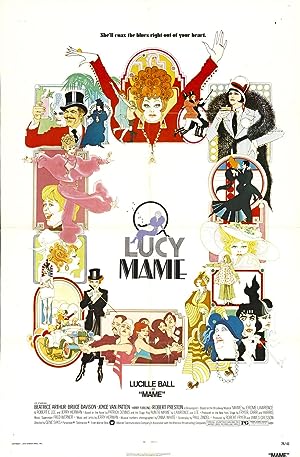 Summary: It’s the late 1920s. Upon the death of wealthy Chicagoan Edward Dennis, his nine-year old son Patrick Dennis becomes the ward of their only living relative, Edward’s equally wealthy New York residing sister, Mame Dennis. Edward’s will states that Patrick is to be raised Protestant in a “traditional” manner and that the trustee, Mr. Babcock with the Knickerbocker Bank, will pay Mame for expenses incurred in raising Patrick, he having the right of refusal to pay if he deems that the spirit of Edward’s will is not honored. Mr. Babcock and Patrick’s longtime nanny, the timid Agnes Gooch, are to ensure that Patrick is raised correctly. Edward included these stipulations in his will as he knows his sister is a flamboyant, free wheeling and eccentric woman who can be considered anything but traditional or conventional. Despite the disruption each provides in the other’s life, Mame and Patrick form a loving, supportive relationship. Mame wants to provide her sense of guidance to Patrick, which means exposing him to a broad spectrum of all that life has to offer. That changes when Mr. Babcock learns what is going on, and the stock market crashes resulting in Mame losing all her money, the events in combination leading to Mr. Babcock taking Patrick away to enroll him in boarding school away from Mame’s daily influence. Although not for herself, Mame realizes that she needs money to get Patrick back and support who she considers her entire family, which includes Agnes and her faithful butler, Ito. She may get a little help in the matter from her best friend, Broadway actress Vera Charles, and a southerner she meets named Beauregard Jackson Pickett Burnside. Over the next several years, Mame’s influence on those around her, including Patrick, is presented, although those relationships are not always smooth sailing, especially as Patrick grows into a man with a mind of his own.