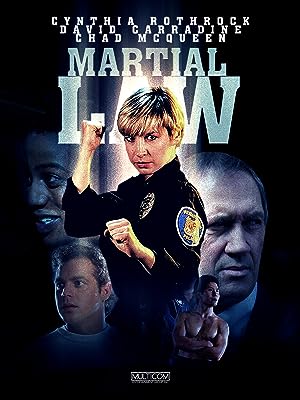 Summary: When it comes to maximum law enforcement, only police officers Sean Thompson and Billie Blake can deliver the power of justice…with their bare hands. They’re a part of the L.A.P.D.’s new program called ‘Martial Law’, a police force that uses full-contact martial arts to subdue criminals in situations where guns are a no-go. But now Sean and Billie’s talents in karate as well as their knowledge on the criminal underworld will be put to the test when they find themselves on a collision course with Dalton Rhodes, a criminal mastermind who runs a cartel-for-hire business, using his dojo as a front for his illegal activities and recruiting new talent. In addition to being a career criminal, Rhodes is also a master at rare forms of kung fu and the last practitioner of the deadly ‘dim-mak’ (death touch) technique. When Sean’s troublesome baby brother Michael falls in with Rhodes’ crowd and becomes a victim of their murderous exploits, the police duo will be forced to take the law into their own hands as their fight with Rhodes and his criminal empire gets very personal…