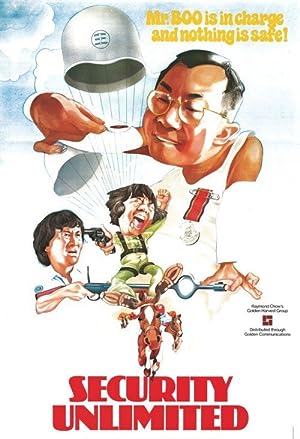 Summary: Chou Sai-Cheong. a bitter supervisor of a Hong Kong private security company, teaches unusual guard tactics to new recruits such as electric mats, parachuting off burning buildings and counter-attacking gunfire. He was secretly observed by his new boss (Stanley Fung) and, unimpressed by his work, the new boss demotes Chou and promotes Chou’s assistant Sam (Sam Hui). Under the leadership of Sam, Chou and new recruit Bruce Tang (Ricky Hui) encounter a slew of misadventures, including pursuing stowaways on a party boat. Bruce ultimately falls in love with one of the stowaways. Finally, they all get entangled in a plot to steal one of China’s most prized treasures on display in Hong Kong, and in a plot involving some missing government money that the security officers were guarding.