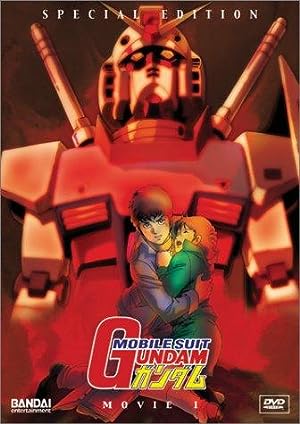 Summary: In the year Universal Century 0079, humans have colonized the area of space lying in between the Earth and the moon. However the ambitious Zabi family, rulers of the Duchy of Zeon (the grouping of colonies furthest from the earth) has sparked a war. Within the first week of this fratricidal conflict, one half of all humans have been decimated. The Duchy, within a month, has invaded and occupied half of the Earth’s surface, thanks to the Duchy’s ultimate weapon, 60-foot tall, heavily armed and highly maneuverable machines known as “Mobile Suits.” The only thing that can save the Federal Forces of Earth is their top-secret “V” Project, based on the loyalist colony Side 7. The aim of the V Project was to build their Mobile Suits for the Federal Forces. As the film opens, Zeon attacks Side 7, sending its top ace, Char Aznable to stop the V Project. 15-year-old Amuro Ray, the son of the chief researcher to the V Project, is struggling to get his friends and neighbors to safety when he runs across an empty mobile suit. This is the Gundam, the sole remaining prototype mobile suit. Firing it up, Amuro becomes an ace almost immediately, killing two Zakus (the standard Zeon MS) with little effort. From there on in, Amuro is drafted into the Federal Forces as are other residents of the colony: Frau Bow, Amuro’s neighbor and semi-girlfriend, Kai Shiden, a young photographer who would just as soon stay clear of combat, and Sayla Mass, a woman who seems to have an inordinate interest in Lt. Char Aznable. Their mission: escort the prototype battleship White Base and the Gundam within to the Federal Forces’ HQ on Earth. Will they succeed?