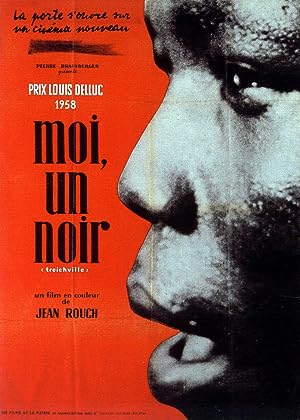 Summary: “I, a Negro” depicts young Nigerien immigrants who left their country to find work in the Ivory Coast, in the Treichville quarter of Abidjan, the capital. These immigrants live in squalor in Treichville, envious of the bordering quarters of The Plateau (the business and industrial district) and the old African quarter of Adjame. The film traces a week in these immigrants’ lives, blurring the line between their characters’ routines and their own. Every morning, Tarzan, Eddy Constantine and Edward G. Robinson seek work in Treichville in hopes of getting the 20 francs that a bowl of soup costs them. They perform menial jobs as dockers carrying sacks and handy labor shipping supplies to Europe. At night, they drink away their sorrows in bars while dreaming about their idealized lives as their “movie” alter-egos, alternatively as an FBI Agent, a womanizing bachelor, a successful boxer, and even able to stand up to the white colonialists that seduce away their women. These dream-like sequences are shot in a poetic mode. Each day is introduced by an interstitial voice of god omniscient narration from Jean Rouch, providing a universal thematic distance to the movie’s events. The film is book-ended by a narration directed at both Petit Jules and the audience from Edward G. Robinson fondly looking back on his childhood in Niger and concluding that his life is worthy of his dreams.