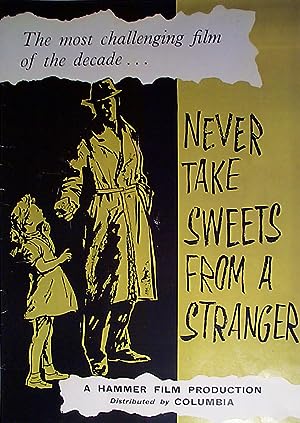 Summary: Jean Carter, nine-year-old daughter of the town’s newly-appointed school principal, Peter Carter and his wife Sally, is playing in the woods with her 11-year-old friend Lucille, when Jean discovers she has lost her purse containing her “candy” money. Lucille tells her she knows where they can get sweets for nothing, and leads her to an imposing mansion, from which the owner, Clarence Olderberry, Sr., a tall, gaunt man of 70 has been watching the girls from a window. That night Jean, unable to sleep, tells her parents that Oldeberry made her and Lucille dance before him nude in exchange for some candy. Carter files a complaint, but the local police chief, Captain Hammond, is skeptical of Jean’s story and warns Carter that the Oldenberry family put the town on the map and have far more standing in the community than the new-comer Carters. Oldenberry, Jr. also tells Carter that if he follows up on the complaint he may be certain that Oldenberry’s lawyers will show Jean no mercy. In the ensuing trial, the defense lawyers confuse Jean, make her an uncreditable witness, and Oldenberry is acquitted, after the enraged Carter attacks him physically in court. While her parents are packing to leave town, Jean and Lucille again are playing in the woods, and are approached by Oldenberry, and the two girls flee in blind panic. Reaching a desolate lake, they find an old rowboat and attempt to escape in it, but the mooring rope is still attached to the shore. And Oldenberry is using it to pull the boat and the girls to him.