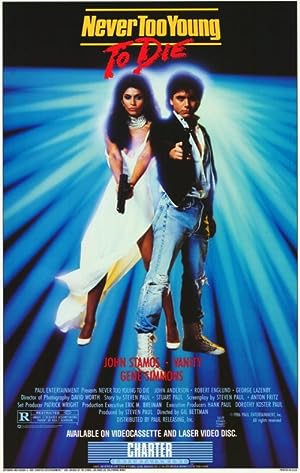 Summary: Velvet Von Ragner is a powerful murderous psychopathic gang leader, but also a hermaphrodite who prides himself of being both a man and a woman. He’s holding a gang rally where he announces his plans to poison the water supply and pipeline of a major US city. However, top US secret agent and double O counterpart Drew Stargrove steals a key component he needs to pull this off. After an action packed shoot out, Stargrove is surrounded and although he puts up a good fight, he’s eventually killed by Von Ragner. However, the component is not on him. Meanwhile, his estranged son Lance, a talented high school gymnast, receives the word of his father’s death. As part of their denial protocol, the government claims that he’s been killed in a car accident, which Lance doesn’t buy. Lance notices that part of his inheritance is a farm he never knew his father had, so he goes there to check it out. The only person living there turns out to be Danja Deering, a beautiful female spy, who worked with Drew in more ways than one. Two of Von Ragner’s henchmen arrive thinking that she has the component and assault her. Lance arrives just in the nick of time and helps her defeat them, although his barn blows up in the process. Danja explains the situation to him and they agree to team up and stop Von Ragner. However, Von Ragner has plenty of insanely loyal, buffed and well armed psychopathic henchmen, he’s a master of disguises and he doesn’t stray away from murder or sexual assault, so they’ll have their work cut out for them. Both sides have their own tech experts to assist them in their quest – Velvet Von Ragner has nerdy Riley and Lance has his Asian-American roommate and tech genius Cliff, who comes up with one of the most original weapons ever seen on film.