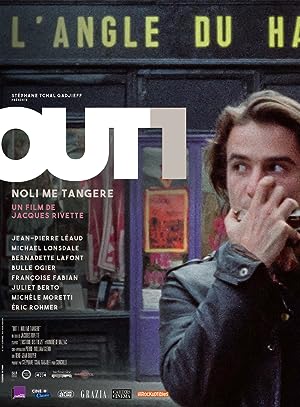 Summary: “Out 1” is a very precise picture of post May 1968 malaise – when Utopian dreams of a new society had crashed and burned, radical terrorism was starting to emerge in unlikely places and a great many other things. Two marginals who don’t know one another stumble into the remnants of a “secret society”: Colin, a seemingly deaf-mute who all of a sudden begins to talk and Frederique, a con artist working the “short con” (stealing drinks and tricking men who think she’s a hooker out of their money). Meanwhile, there are two theater groups rehearsing classic Greek dramas: “Seven Against Thebes” and “Prometheus Bound”. A member of the Moretti group passes a note to Leaud about “The 13” which sends Leaud on a search for “The 13”. His search brings him eventually to Bulle Ogier’s shop in Les Halles “L’Angle du Hasard.” Berto follows much the same path when she steals a cachet of letters from Jacques Doniol-Valcroze and tries to get money from their owners for their return. These twin activities reactivate “The 13”, which had been dormant for years, revealing, among other things, that the two theater groups were once one.