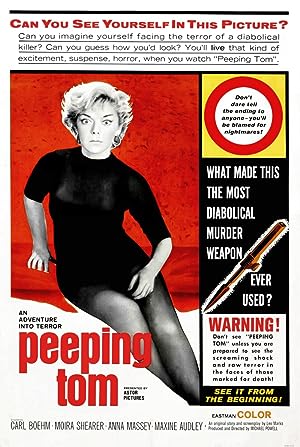 Summary: Mark Lewis, works as a focus puller in a British film studio. On his off hours, he supplies a local porno shop with cheesecake photos and also dabbles in filmmaking. A lonely, unfriendly, sexually repressed fellow, Mark is obsessed with the effects of fear and how they are registered on the face and behavior of the frightened. This obsession dates from the time when, as a child, he served as the subject of some cold-blooded experiments in the psychology of terror conducted by his own scientist father. As a grown man, Mark becomes a compulsive murderer who kills women and records their contorted features and dying gasps on film. His ongoing project is a documentary on fear. With 16mm camera in hand, he accompanies a prostitute to her room and stabs her with a blade concealed in his tripod, all the while photographing her contorted face in the throes of terror and death. Alone in his room, he surrounds himself with the sights and sounds of terror: taped screams, black-and-white “home movies” of convulsed faces. At his house, he meets Helen Stephens, a young woman who lives with her blind mother in a downstairs flat. She visits his flat, where he shows her black-and-white films that were taken of him when he was a child. She is horrified to see that his father used him as a guinea pig in various experiments, taking movies of his reactions of fear.