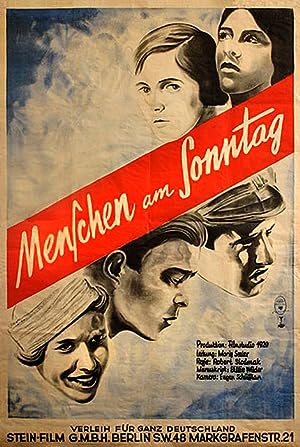 Summary: Edwin, a taxi driver, lives with Annie, a neurasthenic model. They plan to spend Sunday at the Nikolassee beach with Wolfgang, an officer, gentleman, antiquarian, gigolo, at the moment a wine salesman. After an argument, Annie stays at home while Edwin joins Wolf. Wolf has brought along a new girlfriend, Christl. Brigitte, Christl’s best friend, joins the group. Brigitte is the manager of a record shop. At the beach Wolf tries to kiss Christl but she rejects him and he turns his attentions toward Brigitte, who is more receptive. Wolf and Brigitte go off together and he seduces her. Back on the beach, Wolf and Erwin, now tired of their dates, flirt with two other women as Brigitte and Christl look on, appalled. They have small satisfaction when the men have to borrow money from them to pay for the paddle-boat they were renting. As they part at the end of the day, Brigitte hopes Wolf will see her next Sunday, but he and Erwin have other plans. The bond between the two men is the one that counts. They have really spent the Sunday with each other. Edwin returns to his flat to find Annie still in bed. The next day he is driving his cab. Wolf is selling wine, and Brigitte is selling records, all waiting for next Sunday.