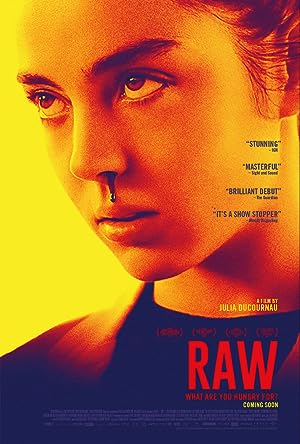 Summary: Raised as a rigorous vegetarian, doe-eyed freshman Justine following in her parents’ footsteps, she is sent off to the reputable Saint-Exupéry Veterinary school where the black sheep of the family, her big sister Alexia, is already studying. There, young virginal Justine, leaving the familial shelter, will abruptly move into a mad new world of school traditions, vicious initiation tests and hard partying, utterly unprepared though for the rough year start only rush week’s mandatory hazing can offer. As a result, with Alexia reluctantly showing her the ropes but only halfway, Justine during the long-established trial of raw offal-eating, she will be forced to chew over her devout herbivorous beliefs and swallow a fresh chunk of bright-red rabbit kidney, unknowingly descending deep into her uncharted animalistic tendencies. Before long, repulsion will be replaced with an unprecedented, equally unquenched and palpable craving for raw meat, transforming Justine into a monstrous carnivore ravenous for human flesh and a gluttonous meat junkie. Now that Justine’s corporeal awakening is finally complete, is there a point denying her hunger?