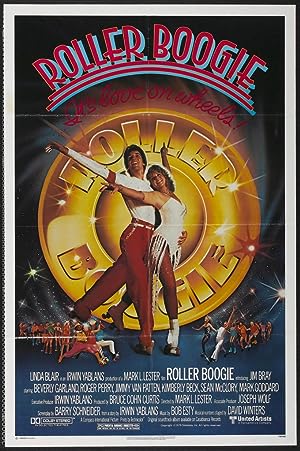 Summary: Beyond ensuring that she makes it into Julliard as a flautist for the upcoming fall term, wealthy Lillian and Roger Barkley largely neglect their teenaged daughter, Terry Barkley. Although Terry doesn’t try to hide the facts from them, her parents have no idea that she hates the flute and the associated music, has no desire to attend Julliard, and spends all her time on the proverbial wrong side of the tracks with her friend Lana roller skating on the Venice Beach boardwalk with the legions of other roller skaters. There, she attracts the attention of Bobby James, the hotshot skater who rightly believes he is headed to the next Olympics. Terry initially rebuffs Bobby’s advances, until she asks him to teach her how to dance so that they can compete in the upcoming roller boogie contest at Jammer’s, the local skating rink owned by Jammer Delaney, a former roller derby star. Terry and Bobby’s relationship eventually becomes more than just about skating. But the roller boogie contest and by association Terry and Bobby’s relationship is threatened when they learn that Thatcher, a cutthroat land developer, has physically threatened Jammer and anyone around Jammer, including the kids at the rink, unless Jammer signs a contract to hand over the roller rink property to him for redevelopment. The situation is even worse for Terry when she learns she has a personal albeit indirect connection to Thatcher.