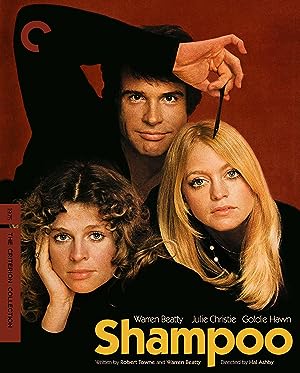 Summary: Thirty-something George Roundy is a Beverly Hills hairdresser, who spends as much time sleeping with his female clients as he does doing their hair. Whether they want to admit it, all the women in his life are on the most part aware that they are are not the only one with whom he is sleeping. And some, such as the wealthy and married Felicia Karpf, have a stronger emotional dependence on George than they would like to admit. George’s current girlfriend is Jill, an up and coming actress. Jill’s best friend is Jackie Shawn, one of George’s old girlfriends who left him because he couldn’t make a true commitment to her. In turn, Jackie is currently having an affair with Lester Karpf, Felicia’s wealthy businessman husband. George is unhappy working at a salon owned by Norman, with whom he is constantly butting heads. In his first act of wanting finally to be a grown up, George wants to open his own salon, but doesn’t have the financial resources to do it, and no bank will lend him money for the venture. Felicia at least convinces Lester to consider investing in George. On Monday, November 4, 1968, the eve of the presidential election, this group spends the evening together, first at a dinner party hosted by Lester, and then another private party. Lester asks his potential new business partner, George, to accompany his mistress Jackie, not knowing that George and Jackie know each other. Jill, who is invited to the party by Jackie, invites director Johnny Pope as her date, he who is considering her for a role in his next movie filming in Egypt and perhaps more. Over the course of the evening, George may come to the realization of what he wants in life both professionally and personally, but achieving happiness will depend upon others in his life, they who have known George up to this time only as an uncommitted narcissist.