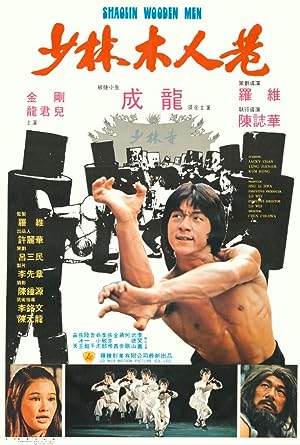 Summary: Jackie witnesses his father’s death by the skilled hands of a martial arts master with an unknown killing technique. Jackie vows to become a Shaolin monk and avenge his death (not very Buddhist of him…), but soon finds that he’s the chump of the class. After befriending a variety of shaolin masters, each of whom teach Jackie a particular style of kung fu (drunken, killing, slippery snake, etc.), Jackie suddenly finds himself good enough to go give the beats to the 100 “wooden men” whom all shaolin (in this flick anyways) have to beat to get the funky haircut. Jackie then proceeds to go around laying the beats on everyone, but shows his humility and compassion at the end.