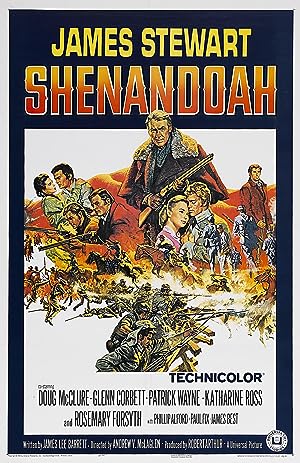 Summary: In Shenandoah, Virginia, widower farmer Charlie Anderson lives a peaceful life with his six sons – Jacob, James, Nathan, John, Henry and Boy, his daughter Jennie, and his daughter-in-law and James’ wife Ann Anderson. Charlie does not let his sons join the army to fight in the Civil War that he does not consider their war. Jennie marries her beloved Lieutenant Sam, but they do not have a honeymoon since Sam has to return to the front. Charlie’s youngest son Boy is mistakenly taken prisoner by soldiers from the North so Charlie rides with his sons to rescue Boy, while James and Ann stay on the farm. It is time of violence and war, and tragedy reaches the Anderson family.